Websolr indices can be provisioned in a couple of different ways. These instructions are for users who have added the Websolr addon via Heroku. If you are a Websolr.com customer and are adding Websolr to your app, then you will not need these instructions. Instead, check out:

There are two ways to install the Websolr addon to your Heroku app: via the command line, and via the Heroku dashboard. The index will be created in the same region as your Heroku app.

It is possible to install multiple Websolr addons to the same Heroku app. One use case for this might be having a Solr index for each language supported by the application.

The Heroku CLI tool can be used to attach Websolr to your Heroku app like so:

There are three optional parameters supported:

From your Heroku app dashboard, click on the Resources tab:

Next, type 'websolr' in the search bar. This will bring up the Websolr addon:

Click on the addon. This will bring up a confirmation screen where you can select a plan level. To see the details of what is available with each plan, check out the addons page. You can upgrade or downgrade your plan at any time. 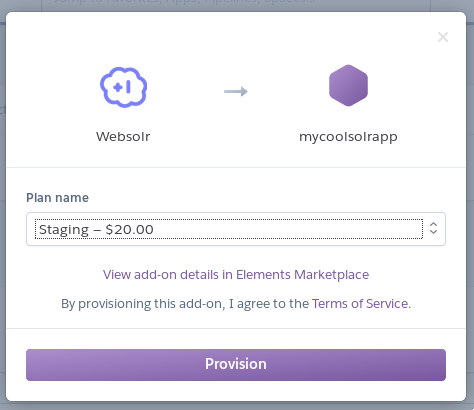 Once you have selected a plan, click on "Provision". This will create your new Solr index.

About Your New Solr Index

Regardless of the method used to add Websolr to your application, an environment variable called WEBSOLR_URL will be created. This variable contains a special URL to your index. This URL is your application's sole means of communicating with Solr.

Some applications expect Solr to be running locally, which is not the case with Websolr on Heroku. If your application has settings that point to locations like localhost:8983 then these will need to be updated. Consult the documentation for your Solr client for details.

How To Find Your Solr Index URL

You can find the special URL in a few different ways:

The Heroku CLI tool has a feature to get the value of a specific environment variable:

The -a flag is optional, it simply tells Heroku which application should be queried.

You can access your Websolr URL from the Heroku dashboard by clicking on the "Settings" tab:

Click on the "Reveal Config Vars" button to show the environment variables for the app. You will see the URL in the WEBSOLR_URL field:

The URL can also be found via the Websolr dashboard: 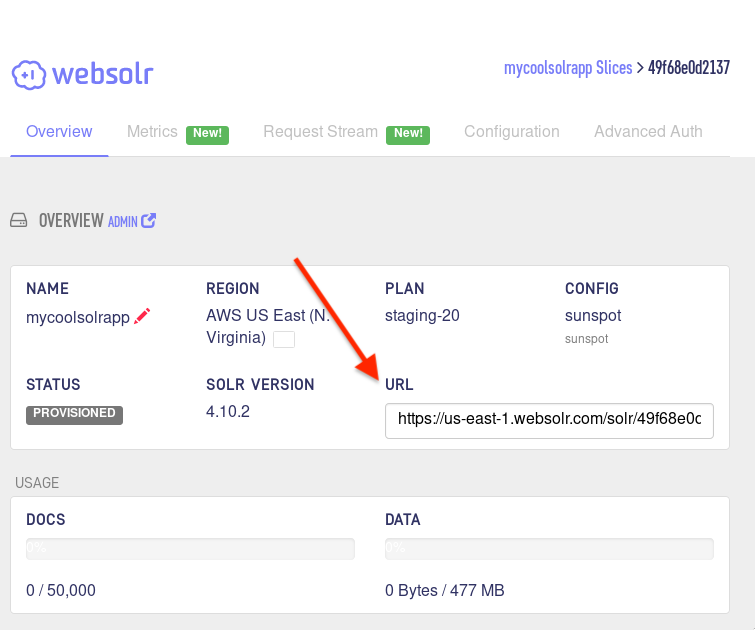 Read on for information about accessing the Websolr dashboard.

Websolr provides a dashboard for managing and inspecting your Solr index. This dashboard can be accessed in one of two ways:

The Heroku CLI tool can be used to open the dashboard for an addon:

The -a flag is optional, it simply tells Heroku which application is the intended target. 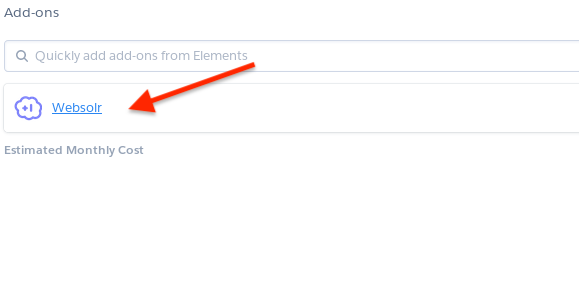 This will open up a landing page with a list of Solr resources on it. For most users, there will only be one listing. Click on this index to open up the dashboard:

The Websolr dashboard shows an overview of your Solr index: name, region, version, plan, etc. There are other tabs for more advanced features as well. These are covered later in the documentation: 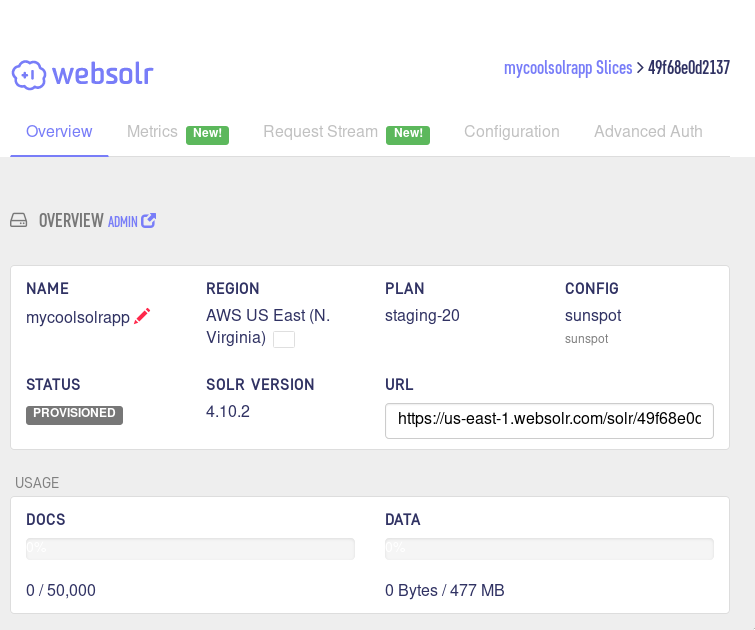 Note that if you have several Websolr addons for an application, each addon will have its own dashboard.

When it's time to scale, you can easily add or remove search resources. This guide covers the process for Heroku users.

Note that changes to your Websolr addon plan do not affect your data. Upgrading or downgrading will not require any downtime or reindexing.

The Heroku CLI tool has options to upgrade or downgrade an addon's plan:

These commands have an optional -a parameter, which allows the user to specify which Heroku app should have its Websolr addon changed.

The plan-slug is a unique identifier for a Websolr plan. These can be found on the Websolr Heroku Addon page: 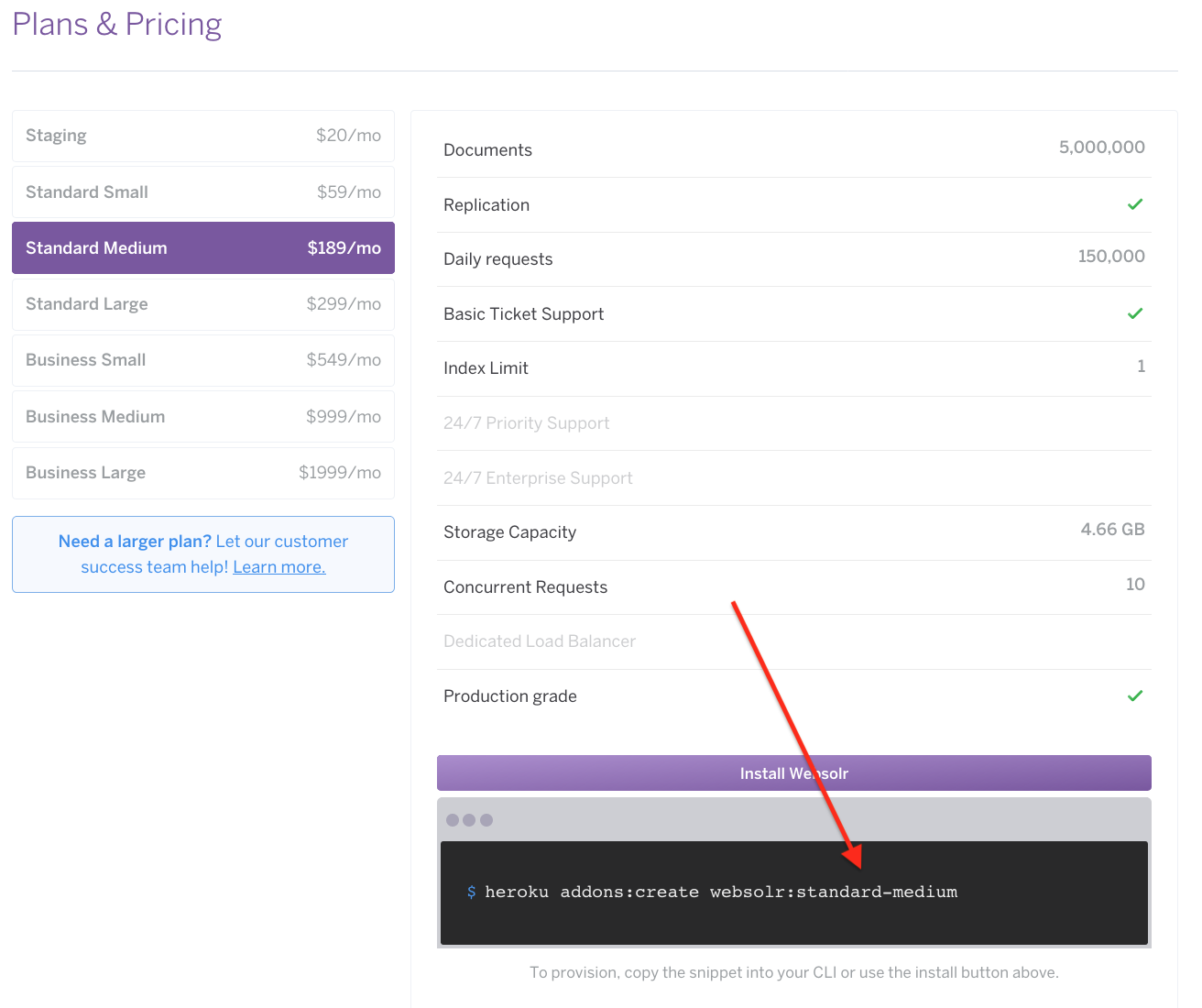 Log into Heroku and navigate to your applications list. Click on the application that has Websolr installed to navigate to its dashboard. In this example, it's mycoolsolrapp: 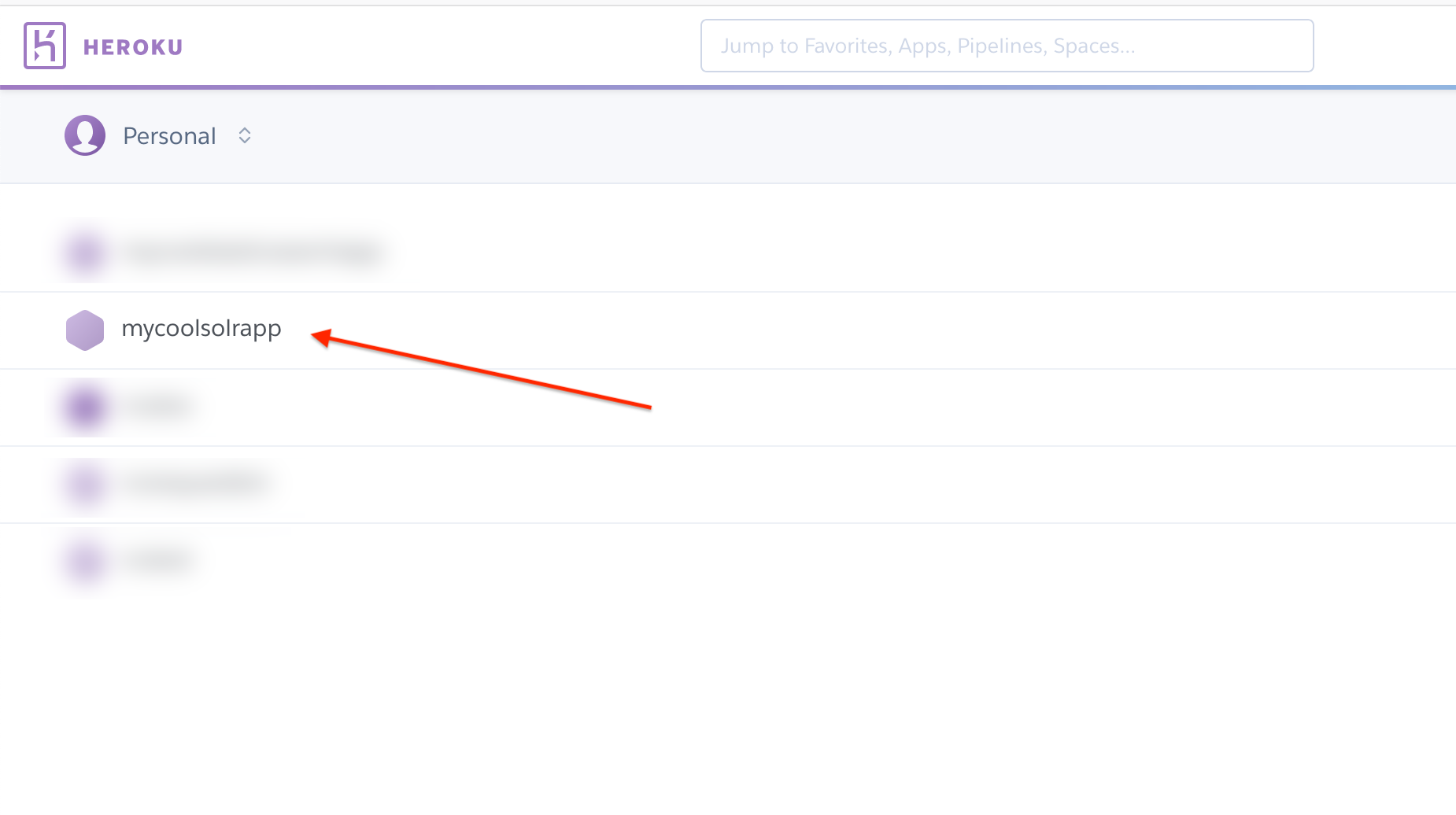 Once open, you'll see an Add-ons list for the app, as well as the plan you're currently on for the app. To edit the plan, click the menu icon on the far right:

Choose "Edit plan". A modal will pop up with a dropdown list of available plans. Choose the new plan you'd like to move to:

Click on the "Provision" button, and your Websolr addon will be instantly updated.

Removing the Websolr addon is a very simple and straightforward process on Heroku. However, it will result in your data being permanently destroyed. Please take proper care to ensure that the addon is being removed from an application that no longer relies on it.

There are two ways to remove the Websolr addon from a Heroku application: via the command line, or through the Heroku App Dashboard. Regardless of the method used, the index will be destroyed immediately.

The Heroku CLI tool has an option to remove an addon from an application:

This command has three optional parameters:

Log into Heroku and navigate to your applications list. Click on the application that has Websolr installed to navigate to its dashboard. In this example, it's mycoolsolrapp:

Once open, you'll see an addons list for the app, as well as the plan you're currently on for the app. To remove the addon, click the menu icon on the far right:

A modal will appear asking you to type the name of your application to confirm the removal of the Websolr addon:

Entering the application name will enable the "Remove add-on" button. Click on this, and your Websolr addon will be destroyed.